By Louise Wilkes on 28th September 2016 in Anxiety 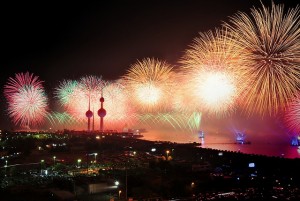 Many dog owners dread the arrival of Autumn as it also means firework season. Normally calm, happy dogs can be transformed into quivering wrecks when the flashes and bangs start. For some dogs their fear is confined to fireworks, for others it also applies to thunder, gun shots, whistles, electronic beeping etc or can be transferred to these things having started with fireworks. There are lots of theories trying to explain this fear. some claim it’s an associated smell ie. gunpowder, others say that the very sensitive hearing of our dogs mean that certain noises actually cause pain.

Last year I was asked to massage a retired greyhound who displayed severe anxiety to fireworks. She would pace and shake and drool whenever she heard them. I began working with her in early October and she received three massages before the end of October. On bonfire night itself her owners were able to use the calming massage techniques I’d shown them and reported that the dog was much calmer and had started coming to them to be “stroked” when she heard noises which upset her as she seemed to realise that the calming massage techniques made her feel better.

I call that a success!

Other things to try

Considering massage therapy for your dog? Find out more...

Send me an email